WHAT BECOMES OF THE BROKEN-HEARTED? 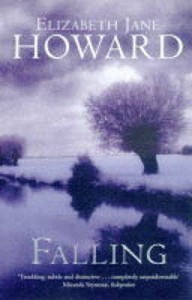 "Falling" is not only a novel that delves into the anatomy of a seduction. It is also masterful in that it gives the reader access into both the inner and outer lives of the two people involved: Henry Kent and Daisy Langrish. Elizabeth Jane Howard fleshes them out with the skill that Vermeer, Goya, Manet, and John Singer Sargent showed to such fine effect on canvas.

Henry, the son of a gardener who never showed him love, learned to be resourceful early in life by trusting to his own wits. He developed a proficiency for discerning the emotional states of women --- preferably ones with wealth and status --- and exploiting them for his own benefit. He had this charm and savoir faire, which he was not abash to speak of, from time to time, with the reader. (The author has most chapters titled either "Henry" or "Daisy", so the reader always knows who is occupying center stage.)

Daisy, who grew up with an aunt ("Jess") who gave her unselfish and unconditional love, had 2 failed marriages, and had turned to playwriting (and scriptwriting) for solace and as a way of making a livelihood for her and her daughter. Eventually, Daisy's work became her life. She learned to be self-sufficient and to view trust as a weakness. So when Henry first approached her at her country cottage about doing some gardening work for her, she was wary. But from the bleakness of an English winter to the warmth of the following summer, he steadily (not minding a few missteps, which he quickly covered up) worked his way into Daisy's heart and affections.

What is remarkable about the development of Daisy's and Henry's relationship over time is how subtly and cleverly it unfolds. The reader can see both sides clearly and make up his/her mind about Henry and Daisy. Here's an example from what Daisy herself had to say after she has been all but won over to Henry:


"Am I in love? It is three weeks now since we went to bed; we have been lovers for twenty-one days and nights. He has continued to love me with the same wholehearted emotion and kindness and I have graduated from what I, somewhat defensively, described as some sort of old virgin to what he has described as a normal sensual woman for whom sex has become a joyous necessity. Indeed, I think I have become more sexual than he, but when I said this to him, he laughed and said it was because I had been starved for so long. ‘Not just of sex,’ he had added, ‘but of everything that goes with it. My greatest pleasure is giving you pleasure.’

“I am afraid that I do not give him enough back, but I have noticed that he often makes me want him and then withholds his favours --- teases me --- and that he certainly enjoys that. Sometimes he starts that game in the afternoon and then we go upstairs, but more often he deliberately excites me hours before he will take me to bed. I have begun to enjoy this game. It is wonderful to want him and to have no shame, no self-conscious reservations at all. ‘You trust me now, don’t you?’ he said yesterday. And I do. Even when he hurt me a little at the beginning, he was so aware of it and so tender… Those are the moments when I do feel love for him.” (pp. 300-301)

Henry, all through the novel, shows how calculating and cunning he can be, showing how attuned he can be to a woman's wants and needs once he knows that she has become susceptible to his shows of care, patience, and his apparently inexhaustible well of kindness and understanding:

"She was silent all the way back, and I was content to savour the salt of her tears from her mouth. I was light-headed with the exhilaration of that first kiss --- are not all first kisses unlike any others? --- and the ceertainty that I was on the brink of achieving all that I had schemed and dreamed about for so long.


Talk about a smooth operator!


To find out what happens between Henry and Daisy, I invite you now reading this review to take the plunge and see what ensues. So, hold on tight, because you're going to be in for quite a rocky ride.