A BOOK FOR THE READER WHO VALUES & CHERISHES HUMANITY 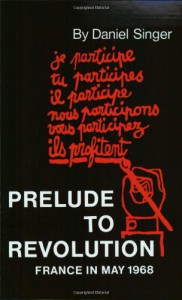 Prelude to Revolution: France in May 1968, first published by Hill and Wang in 1970, is an account of the student uprising and general strike that shook France and imperiled the Gaullist regime in the spring of 1968.

Singer argues that the events of May '68, while not a revolution, even a failed one, had the potential to overturn a contradictory French society. However, he claims, they achieved no radical change because the genuine radicals on the non-Communist left had insufficient organization and influence, while the supposedly radical Communist Party, with sufficient strength to force fundamental change in the crisis, was not actually interested in doing so. According to Percy Brazil, this is the work which established its author, Daniel Singer, as "a major political writer."