TALES OF LOSS, DESPAIR, DEFEAT & HOPE FROM THE ACCOUNTS OF WWII VETERANS (Volume 1) 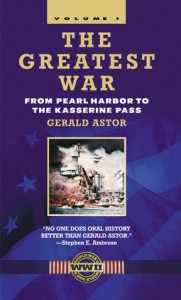 Gerald Astor was one of the country's best military historians. This particular book, replete with the oral histories of several veterans who had served in the earliest campaigns waged by the U.S. in the Second World War, brings alive the sense of shock, despair, defeat, and hope that typified those challenging times. It was very sobering to read the eyewitness accounts of the soldiers, sailors, airmen, and one Army nurse who took part in the Battle of the Philippines, which resulted in one of the most grievous defeats in U.S. military history. There are also accounts of the first efforts made by the U.S. Army Air Force (USAAF) in the air war over Europe against Germany, and the Battles of the Java Sea, Coral Sea, Midway, Port Moresby (New Guinea), and Guadalcanal.

The book ends with accounts of Operation Torch, the Allied invasion of North Africa (November 1942), where U.S. forces fought the Germans for the first time in ground combat. Indeed, the U.S. went through considerable growing pains there, learning from its mistakes, as it began the slow process of building an efficient and effective fighting force. This is a book which will give the reader a deep appreciation for the sacrifices those veterans made on our behalf 70 years ago. Their stories bring an immediacy to the history that makes it vividly alive once more.