ODYSSEY OF A FIGHTER PILOT 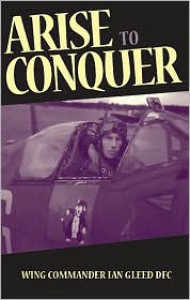 "ARISE TO CONQUER" was one of those books that was published in the UK during the Second World War by a select group of airmen so as to give people on the home front a palpable sense of what frontline combat was like. In this case, the reader is given a glimpse into the life of its author, Ian Gleed. Gleed, who had joined the Royal Air Force (RAF) prewar, describes life in a fighter squadron in the last hours of peace. Then, upon the declaration of war in September 1939, his squadron is tasked with flying coastal patrols in their Hawker Hurricane fighters, protecting merchant shipping from Luftwaffe attack. Very little action takes place as autumn gives way to winter. Gleed is transferred to another squadron as a flight leader, this time flying Spitfires.

But this was not to be a long stay for Gleed. While flying a Spitfire one day on a high altitude test, the aircraft experiences significant structural collapse. How Gleed managed to extricate himself from the cockpit and bail out is nothing short of miraculous. He's wounded and placed in hospital for 3 weeks.

Gleed, after a few days of enforced rest, becomes impatient and clamors to be placed back on flying status. Eventually, his persistence pays off and he's posted to a Hurricane squadron in France.  He arrives (via ship and train) at No. 87 Squadron shortly after the beginning of the German blitzkrieg in the West. His words convey the urgency, the terror and despair at that stage of the war.

"... Around me a gigantic dog-fight was taking place; it was impossible to see which was friend or foe until you were close enough to see the aircraft markings. Round and round I went. Slowly but steadily I was turning inside the 109. Round and round until I felt sick and hardly knew which way up I was. Now and then I flashed by other 'planes, sometimes with black crosses [German] and sometimes with roundels [Allied].

" 'You're a swine. --- a few more turns and you'll have had it.' Damn! it was as if the Hun had heard my thoughts. He turned on his back and dived vertically. I followed. Brrrrrrrmmm. Damn! that was a shaky shot. Christ! a large chunk of something flew off. A snaky white trail suddenly appeared by my cockpit. 'Someone on your tail; aileron turn, quick. Stick hard over to one side. That's lost him. Thank God for that! Now for home."

Gleed survives the evacuation of 87 Squadron to the UK and the subsequent French collapse. The UK is now under threat of invasion. Throughout the summer and fall of 1940, Gleed, who is adept in conveying so much of squadron life through sparse word-pictures, shows how it was that the British refused to fold and inflicted on Hitler his first serious setback in the War.

Taken as a whole, "ARISE TO CONQUER" is a classic of the combat memoir genre,  comparable to Saint-Exupery's "Flight to Arras." I recommend it highly.