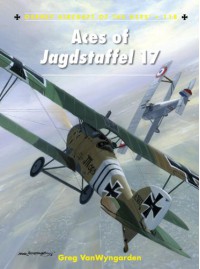 While not as well-known as the squadron (Jasta 11) or fighter group (JG 1) the Red Baron (Manfred von Richthofen) commanded in battle, Jagdstaffel 17 had a no less distinguished record. Officially established in October 1916, Jagdstaffel 17 first went into action against the French. It was during this time that one of its rising stars rose into prominence as he grew in experience and began steadily taking a toll of enemy aircraft. His name: Julius Buckler (who would later go on to be the unit's top ace and holder of the Pour le Mérite, Imperial Germany's highest award for bravery).

Jagdstaffel 17 also had one of the oldest fighter pilots in Jakob Wolff. As an early air enthusiast, he had learned to fly before the war and at age 46, had managed, after petitioning for an active service role, to be accepted into the air service. And as a Jew, despite some obstacles it created for him owing to social prejudice, Wolff, by virtue of his combat record, was eventually promoted to reserve officer rank.

This book has lots of fine illustrations and photographs, which any student of First World War aviation will love. Moreover, for its 94 pages, "ACES OF JAGDSTAFFEL 17" tells an engaging and colorful story of a unit that flew a variety of aircraft against a host of enemies (French, British, Belgian, and American) all along the Western Front, achieving 101 confirmed victories in aerial combat by war's end.