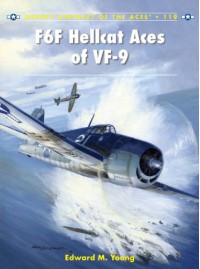 Osprey has once again produced a high quality book about an outstanding fighter unit of the Second World War.  In this case, it is VF-9, a U.S. Navy fighter unit, which was activated in March 1942 as part of the Navy's expansion of its naval aviation arm in the immediate aftermath of the Pearl Harbor attack.  VF-9 took part in 3 fighter cruises during its wartime service.   In its first fighter cruise, VF-9 was equipped with the F4F Wildcat fighter and took part in Operation Torch, the Anglo-American invasion of North Africa in November 1942, operating from the aircraft carrier USS Ranger.

After seeing limited action against elements of the Vichy French air force, VF-9 returned to the U.S., where it was re-equipped with the Navy's newest fighter, the F6F Hellcat, which was to prove itself more than capable of taking on the best of both the Japanese Army Air Force (JAAF) and the Imperial Japanese Navy (IJN) air arm.  VF-9 trained extensively on the Hellcat, which it used so effectively against Japan during the American offensives in the Central Pacific (1944), attacks on the Japanese home islands (February 1945), and during the Battle of Okinawa.   By war's end, VF-9 was credited with shooting down 250 enemy planes and produced 20 aces.

On the whole, this is a fantastic book, replete with a dazzling array of photos and illustrations.