A HISTORY WITH THE SCOPE AND SWEEP OF AN EPIC NOVEL 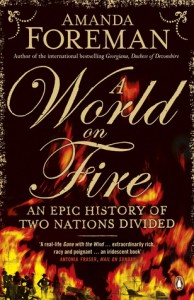 When I purchased this book over a year ago, I sensed that I would be undertaking an Olympian journey because there is much about the history of the American Civil War than meets the eye at first glance. The story of Anglo-American relations during this period is a very complex and complicated one. It abounds in drama with a variety of rich and compelling characters (great and small) not unlike that in an epic novel. I learned SO, SO MUCH from reading "A WORLD ON FIRE." I had been largely unaware of the British influence and contribution (not always voluntary) in both North and South. There was also the various pressures both sides placed on Britain, which did not always maintain a wholly neutral position. Indeed, as Dr. Foreman asserts "... neither the North nor the South had seen the contradiction in demanding British aid once the situation was reversed. Both had unscrupulously stooped to threats and blackmail in their attempts to gain support, the South using cotton, the North using Canada. Both were guilty in their mistreatment of Negroes, both had shipped arms from England and both had benefited from British volunteers."

Dr. Amanda Foreman richly deserves all the plaudits she has received for this book, for it is a true tour de force, likely to be the definitive source for any readers and historians wanting to better understand and analyze the nature and dynamics of the Civil War as it affected Washington, Richmond, and London. I enjoyed the journey and now that it is over, I feel somewhat bereft.